The Economics of a Venture Capital Deal 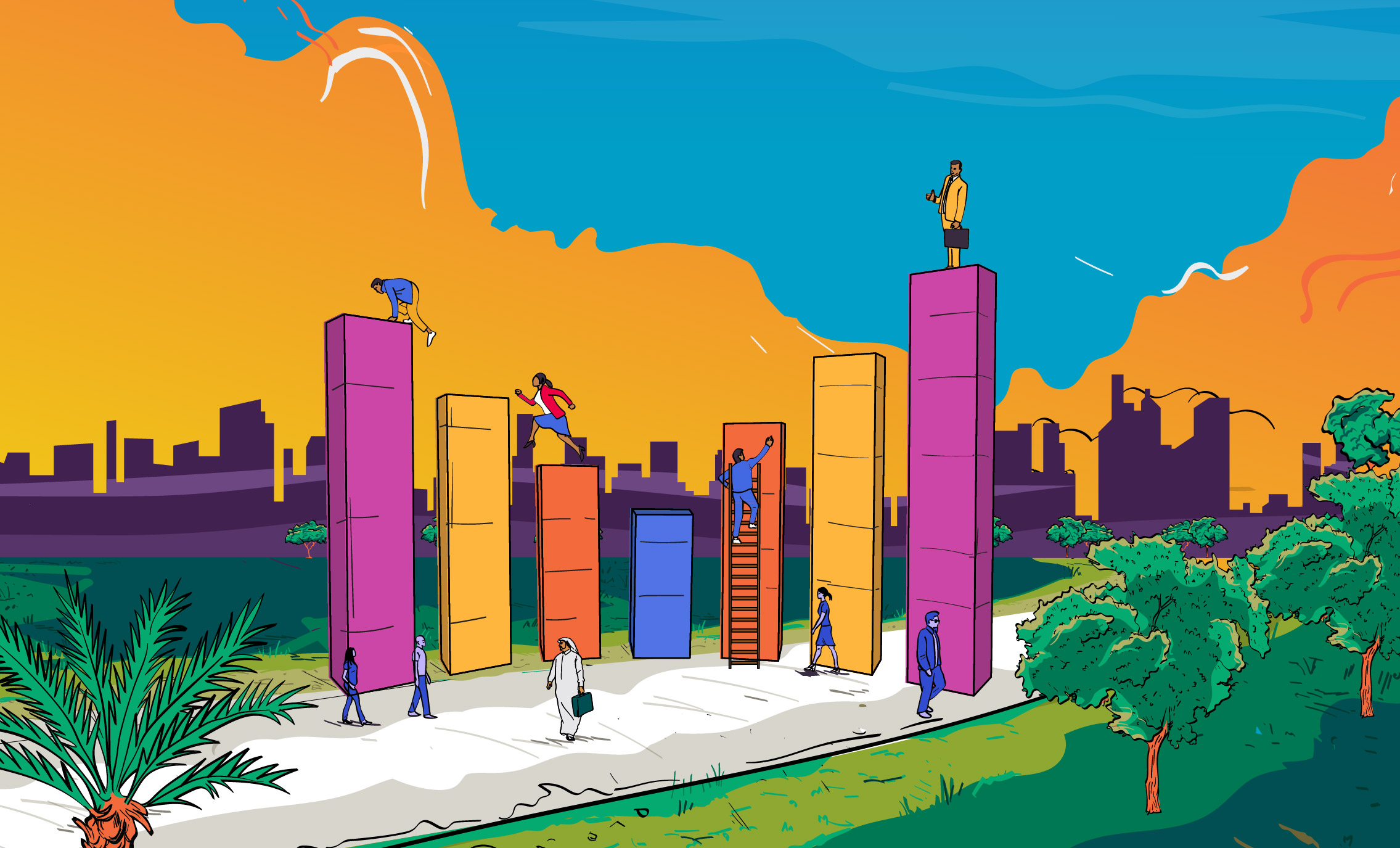 The Economics of a Venture Capital Deal

Al Tamimi & Company published the 2021 issue of its "Venture Capital & Emerging Companies Law Review". The review offers content curated for anyone interested in the world of entrepreneurship, tech disruption and the financing of the coming generation of regional unicorns.

Investors, whether in connection with a buyout, a late-stage investment, or an early-stage investment, are looking to capitalize on their investments. In a venture capital context, investments in early or growth stage start-ups are considered “high-risk-high-reward”, and investors look for more robust mechanisms to ensure that the value of their investment is protected. Liquidation preferences and anti-dilution protection are two of several venture-capital-specific provisions that provide a measure of comfort to investors.

As valuations balloon with each equity funding round, investors in each new round want some level of certainty that they will receive a return on their investment on a sale of their shares, and in a venture capital context, investors tend to take on larger risks when investing in start-ups that do not have either a strong track record or positive earnings. A liquidation preference therefore offers investors a tool to ensure they receive their investment back in preference and priority to other shareholders in certain specific cases.

Participating Liquidation Preference: In a participating liquidation preference, the investor gets a complete return of their capital investment first and in priority to all other shareholders, and then has the right to “participate” in the remaining proceeds distributed to all shareholders on a pro rata basis with the remaining shareholders. By way of example, assume an investor made an investment of USD 1,000,000 in consideration for 100,000 Preferred Shares, for a resulting ownership of 50% of the start-up’s share capital.

If we use the example above where an investor has made an investment of USD 1,000,000 for 50% of a start- up’s share capital, and the start-up’s shares are once again sold at a total valuation of USD 1,500,000, the investor would have to make a choice between two possible options; the investor could either exercise the liquidation preference and receive a guaranteed USD 1,000,000 back, or alternatively, can choose to convert its preferred shares to ordinary shares for USD 750,000 (i.e. 50% of 1.5 million). The choice here seems obvious, and the investor would most likely opt for the USD 1,000,000. However, should the company sell for a value higher than was anticipated, the investor will choose to receive its pro rata portion of the consideration. 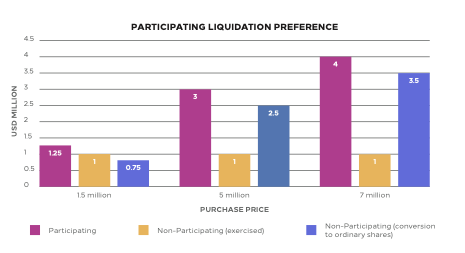 Standard Seniority: As a general approach to venture capital funding rounds, new equity- round investors are offered preferred shares which carry preferential economic and voting rights. Therefore, liquidation preferences can be “stacked”, and payouts are in order form latest round to earliest round. This is the standard “last in, first out” approach, and each new funding round investor would receive its payout prior to the investors of the preceding funding round.

The obvious risk for founders and early stage investors is that they could be left with little (to nothing at all) if the proceeds from the liquidity event are insufficient and the waterfall dries up due to payments of more senior liquidation preferences before more junior preference holders can realize a return.

Pari Passu Seniority: A pari passu liquidation preference gives all investors holding preferred shares equal seniority status. This means that all investors would share in at least some part of the proceeds and no one is left with nothing.

A 1x multiple guarantees that the investor gets 100% of their money back. While the market standard approach to a liquidation preference is to grant the investor the right to receive all of its invested capital (which is venture capital lingo is a “1x liquidation preference”), investors may, in certain circumstances, request a multiple of their capital invested. Therefore, an investor may request 2x or 3x its invested capital to be paid on the occurrence of a liquidity event. While 2x or 3x multiples may be acceptable in certain rare scenarios, for example where a start-up may be willing to offer such return multiples in an insolvency rescue funding round, the market standard approach in the Middle East is a 1x liquidation preference.

Anti-dilution protection operates to preserve the economic value and not the ownership percentage of an investor’s investment. It is therefore, in its simplest form, a mechanism that grants investors additional shares to compensate them for the diminution of the start-up’s valuation in the future.

To illustrate potential investment risks that may arise, and how an anti-dilution right can protect the value of an investment, let’s take the following example:

This is what is called a 'Down Round' in a venture capital context. What would happen then?

In this case, the Series A investor’s overall ownership and value position has deteriorated significantly; its ownership has been diluted to 5.5%, and its 500,000 shares that were once worth USD 10 per share are now worth USD 1.33 per share!

Given the loss of return due to the devaluation of the start-up, anti-dilution protections kick-in during a Down Round.

If a Down Round closes, the anti-dilution provisions under the relevant documents may provide that the start- up would issue to the Series A investor 'bonus shares' to compensate for the diminution in the Series A investor’s investment. These shares would be issued for no consideration, or, if that is not permissible under applicable laws, at par value.

Whether the agreements provide for the issue of bonus shares or an adjustment to the Conversion Price, anti-dilution provisions are inherently tied to the value of the shares.

So how do we calculate the number of 'bonus shares' or the adjusted Conversion Price based on the price per share paid by the investor?

There are two formulas; a weighted average formula and a full ratchet formula. The full ratchet formula is a rather draconian approach to anti-dilution, and the venture capital ecosystem has moved further away from full ratchet anti-dilution protection, although it may still appear or otherwise be justified in certain specific instances, for example, when an investor is investing in a distressed start-up and seeks additional protections.

Liquidation rights and anti-dilution rights can carry significant implications on the investor and the founders, so it is vital that legal and financial advice is sought prior to agreeing to confer any such rights under the terms of each equity funding transaction.

Navigating Abu Dhabi's Free Zones: What jurisdiction & how does it work?

Taxes for startups: What do I need to worry about?

How does the gig economy work in the UAE?

E-commerce in the UAE: relevant laws and regulations impacting the industry

Choosing a type of legal form & business structure in the UAE

Pre-money vs. Post-money safes: they key differences you need to know

Investment in the UAE: how to launch a start-up company?

Incorporating in Abu Dhabi: What Jurisdiction?

Key Steps to Registering Your Business in the UAE

Quiz: Legal & regulatory – Are you ready to incorporate your business in the UAE?

Registering with the Abu Dhabi Chamber of Commerce and Industry

Areas of law every entrepreneur should know